Operations & Maintenance (O&M). A public partner contracts with a private partner to operate and maintain a water and/or wastewater system while the public partner retains ownership and rate setting authority

An O&M partnership transfers daily responsibility and risksfrom the public partner to the private partner.

The scope of the partnership could include: treatment plants, collection and distribution systems, pump stations, meter reading, customer service, and billing.

A typical O&M partnership has the following attributes:

Veolia: The City of Palmetto, Florida

In 1991, the city of Palmetto, Florida selected Veolia to manage their 2.4 million gallons per day (combined capacity) Bardenpho and oxidation ditch wastewater treatment plants, 36 lift stations, a land application program for sludge, and an effluent reuse program with a reuse distribution system.

The city of Palmetto provides wastewater treatment services to a population of approximately 130,000 people on the Gulf Coast of Florida. For years, the city had been operating the treatment plant on its own, but in the late 1980s, the city’s growing population and stringent discharge requirements prompted Palmetto to seek out an experienced contract operator to preserve its natural resources.

In the years since, Veolia has undertaken numerous initiatives to improve operational efficiencies and prevent untreated wastewater from entering the Terra Ceia Bay. Measures such as developing a reclaimed water distribution system, improving process control, upgrading the effluent disinfectant, and overseeing discharges to the Bay have resulted in decades of cost savings, a perfect safety record, significant improvements to compliance rates, and improved quality of dischargesto endangered shellfish beds. 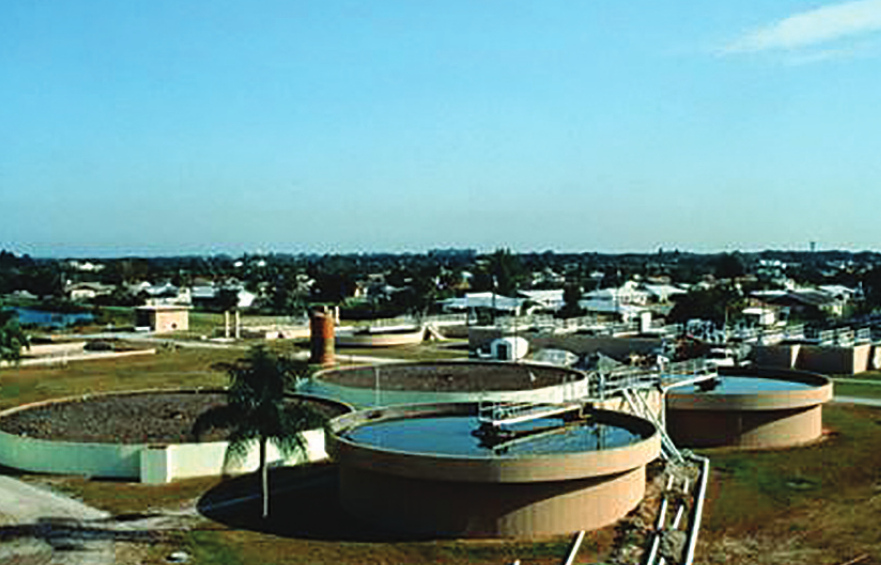 “Veolia has been here now for more than 27 years, and they've not had issues in that time. So that's a phenomenal record. They are really a community partner, and they play a big part in a lot of our big annualevents and outings. Whenever we have an emergency like with the hurricane we had a few years ago, I knew the plant was in good hands. They give me a high level of confidence."
Shirley Groover Bryant
Palmetto Mayor

Inframark is responsible for operations and maintenance of water and waste-water treatment plants, and associated collection and distribution systems, in Kingwood, Texas. Inframark’s relationship with the Kingwood area of Houston began in 1974 when several utility districts selected Inframark to assist in correcting operational problems in their water and wastewater plants. The relationship continued to grow over time as Kingwood added more water and wastewater systems. In 1996, Kingwood was annexed by the city of Houston, and in 1997, and Inframark entered into a contract with the city to operate and maintain the water systems in the Kingwood area, which continues today.

When Houston annexed Kingwood, Inframark continued its role a system operator and helped city staff transition other services to municipal operations. This included a smooth and efficient transition of meter reading, billing, collection, and customer service. Additionally, Inframark briefed Houston city staff on a major upgrade of the treatment facilities. Because Inframark was involved in this multi-phased project from the beginning, it was able to bring the city up to speed quickly and ensure a successful transition.

Inframark has provided uninterrupted service for more than 45 years, evolving our partnership with the city through major upgrades and system expansions. Many of Inframark’s recommendations have saved the city money and created operational efficiencies. For example, Inframark performed a recent filter upgrade that saved the city $590,000. Inframark also recommended changes to the proposed expansion of the Kingwood Central wastewater treatment plant, which reduced the cost of construction significantly. The resulting modifications to the tank levels and improved oxygen transfer from the fine bubble diffusers eliminated additional construction of extra tanks and led to a 30% decrease in electricity usage as a result.

As a partner with the city, we have managed operations through several natural disasters with minimal disruption to service. Inframark was instrumental in the efforts to keep the system operational after Hurricane Harvey in August 2017. Inframark employees jumped headfirst into the tasks of restoring power, fixing debris-laden equipment, and assessing damage to flooded areas. With the example set by Project Manager, Jonathan Dawson, crews worked tirelessly and continuously despite road conditions, damaged or no facilities, and, in some cases, dealing with a personal loss. In addition, 12 Inframark employees convoyed from Oklahoma with equipment, vehicles, and emergency response supplies to begin assisting recovery efforts as soon as the water began to subside. Within 72 hours, the team was able to restore operations at 95% of the facilities in the Kingwood area 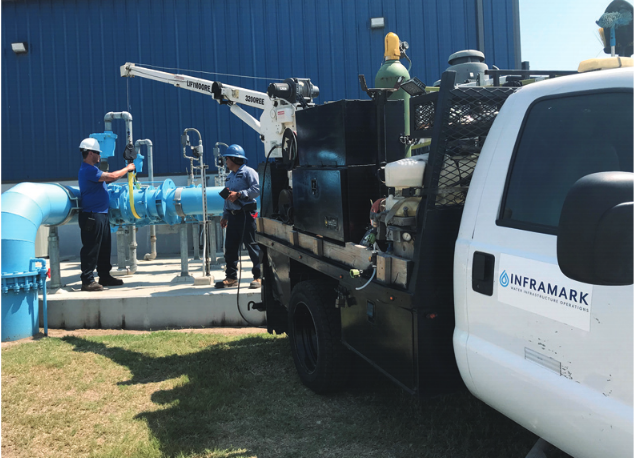 “They do an excellent job. They don't want to go back and repeat work so they spendtime doing it properly and finding the best solutions.”
Anthony Edwards
Public Works and Engineering Drinking Water Operations, Former Senior Inspector, City of Houston

Jacobs and the North Hudson Sewerage Authority (NHSA) have worked together since 1989 to optimize and improve wastewater infrastructure, treatment performance, and services for nearly 180,000 people in four cities along the Hudson River. The parties’ collaborative efforts over three decades have improved water quality in the Hudson and supported development and revitalization efforts.

When Jacobs began working with the city of Hoboken and NHSA’spredecessor organizations, the facilities for which the company assumed responsibility were aging and ineffective. The communities they served faced regulatory violations and penalties from local and federal authorities and were under a ban on new sewer connections. Jacobs optimized treatment processes, trained operators, and returned facilities to compliant operations allowing the ban on new connections to be lifted. Jacobs coordinated operations with capital improvements that helped reduce pollutants released into the Hudson, and ultimately enabled the Authority to transform the Hudson waterfront from eyesore to valued asset. Jacobs also supported response and recovery during and after Superstorm Sandy in 2012. Team members made emergency repairs and returned equipment to full operation within 10 days of the storm.

“Fortunately, for the North Hudson Sewerage Authority, Jacobs, our partner of 22 years at the time, came to our assistance and in 24 hours provided an expert team to address the damage caused by the disastrous storm surge. Our main Sewage Treatment Plant in Hoboken was pumped out, some 24 pumps were removed, rebuilt and replaced and temporary electrical control systems con-structed to enable primary treatment 48 hours later with full secondary treatment restored within 5 days of the system failure. It was team work at its best.
Frederic J. Pocci
P.E.

Through this partnership, SUEZ has helped the Springfield facility significantly reduce its energy consumption and greenhouse gas emissions since 2000. Upgrades at the plant resulted in $500,000 in electrical power savings and a significant decrease in use of natural gas.

SUEZ has also implemented $14 million in capital improvements including the design, build and operation of a biosolids handling system,as well as a combined sewer overflow monitoring system.

This partnership has helped the Springfield facility be part of “The World is our Classroom” program organized by the Springfield Water & Sewer Commission. Every fifth grader and teacher in Springfield participates in this hands-on curriculum that explores science, math and engineering concepts at the Springfield Wastewater Treatment Facility 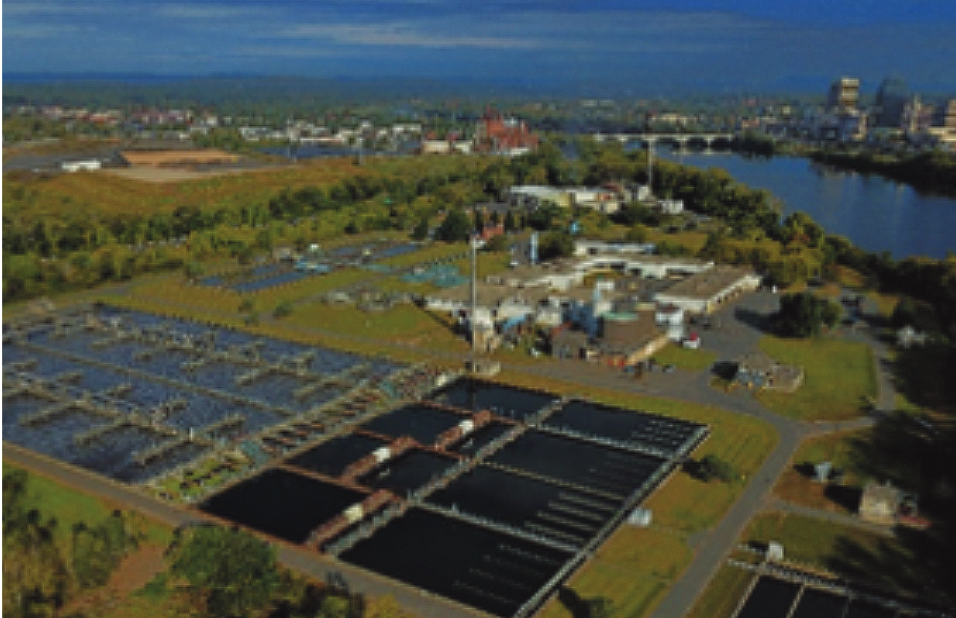 “[SUEZ] has attracted and retained over the years highly qualified professionals whose skills and dedication to their craft has manifested itself in a finely tuned and efficient wastewater treatment plant as confirmed by operating performance data.”
Bill Fuqua
Contract Administrator, SWSC